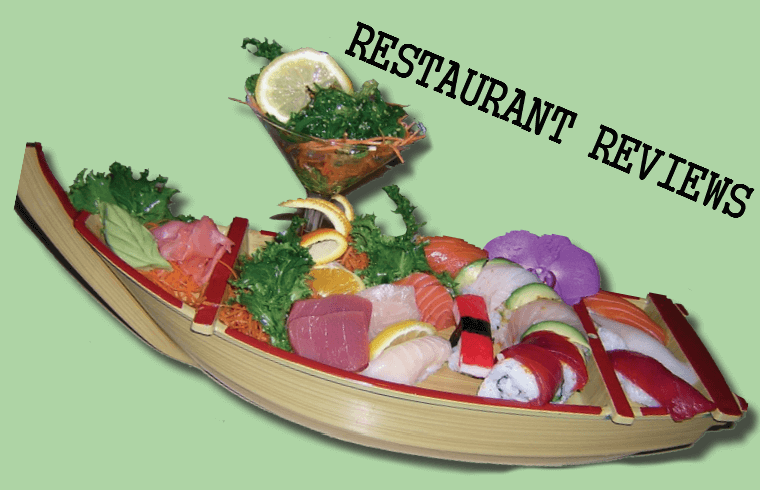 We were seated next to the sushi bar when we visited Siam Orchid. This was good in that I really got a kick out of watching these guys ply their trade. A word of advice, don’t get into a knife fight with a sushi chef, they know what they doing. The variety presented on the menu is nothing short of mind boggling. There are more than one hundred choices on the Japanese side of the menu and another seventy of so on the Thai side. Thankfully, the menu is beautifully illustrated or we might still be sitting there deciding what to eat. To order wonton soup here is a sin not unlike ordering vanilla at Baskin Robbins. We started by sharing the Tuna Tataki which was seared just enough to turn the edges white, sliced thin, then artistically arranged atop ponzu sauce which is like soy sauce, but with a distinct ginger flavor. I had a couple of slices, then backed away so as not to risk a chopstick wound from the frenzied consumption by the wife and kid. Peyton’s first encounter with wasabi provided the comic relief for the evening. As we waited for our entrees, one of the large Sashimi boats was delivered to an adjoining table and looked nothing short of spectacular. After seeing it I feared we had been out ordered by our neighbors, but everything worked out just fine. I had the shrimp Pad Thai, sauteed rice noodles with egg, bean sprouts, ground peanuts, and scallions. Eight large shrimp topped the dish which had a wonderful flavor with the rice noodles having just the right bite. Inspired by the illustration, Mrs. Majors selected the Siam Orchid roll which featured tempura shrimp with asparagus, avocado, and scallion, then wrapped in sticky rice and topped with fried snapper. It was as good as it sounds, and for $12.95 was a lot of quality food. The garnish work on the plates was outstanding, even the kids Steak Teriyaki was very pleasingly presented. The desserts were just as interesting. The ice cream tempura was a ball of ice cream wrapped in a very light batter and then fried. Fried ice cream is a misnomer most times you see it on a menu, but in this case it was the real deal. It was a nice mix of sweet and savory. We also tried the lime delight, a pie similar to key lime but with a much more pronounced tart zing. Between food stylists and Photoshop even a Big Mac looks worth eating in the picture. What impressed me was that the food at Siam Orchid all looked and tasted as good as the illustrations would have you believe.

This place is awesome… The staff are super friendly… Nice cozy atmosphere… I’ve been here countless times..and the food is always DELICIOUS… I highly recommend everyone to go to this place… You will never regret it… The sushi is extremely fresh and the thai food is great… The wait is not long at all for food or seating and the wait staff are right there ready to help with anything overall GREAT.

Sushi is the freshest around. I’ve eaten at many other sushi and Thai places, but none can top the quality and freshness of the sushi there. Two words to describe Siam Orchid; simply amazing.